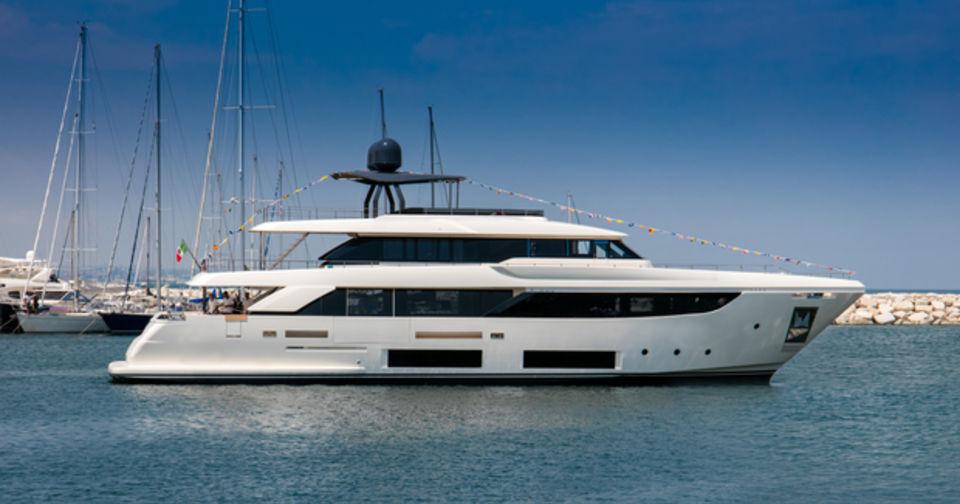 With 5 units already sold ahead of its presentation, the new model has taken to the water at Ferretti Group's Superyacht Yard in Ancona

The new Navetta generation, a state-of-the-art model extremely popular on the market, sails forth a wave ahead of other brands. Following on from the Navetta 37, the Navetta 33 is the second model in the new series to hit the water and the third project in the new generation of Custom Line yachts, joining an unrivalled fleet of semidisplacement superyachts that includes the Navetta 42 in development. The setting for the launch of the first Navetta 33, which took place last Thursday, was Ferretti Group's Superyacht Yard in Ancona, one of the leading yachtbuilding hubs in Europe and the site of the production facilities for the entire Navetta series. The fleet built in this shipyard include the magnificent Navetta 28, the internationally acclaimed 37- metre yacht with 5 units sold in under a year, and the flagship Navetta 42, the first of which has already been sold while still under construction. “The Navetta 33 will define the nautical landscape in the years to come with its irresistible beauty” stated Mr. Alberto Galassi, Ferretti Group CEO. “Thanks to its special charm and its innovative features, cutting-edge technology and superior design, it outclasses every other boat within the same category. It’s essentially in a league of its own. It is uniquely chic, upgrading luxury to the pure sophistication that every yacht owner desires in order to enhance the pleasure of yachting. I am not surprised that we’ve already sold 5 units ahead of its presentation.” The super exclusive presentation event “Midsummer Dream” will keep as well the uniqueness of the brand new Navetta 33. It will be held in Ibiza on 29 and 30 July and will see the unveiling of the yacht in the world’s first official preview before a select group of owners. The exclusive venues will be Liò, one of the most glamorous clubs in the international nightlife scene, leased for a private event for the first time, the famous Ibiza Marina and the magnificent Experimental Beach, with its unmistakable Balearic charm. The new model will also be among the yachts showcased from 8–10 September this year, at the Ferretti Group's Private Preview in Monte Carlo. Yacht owners and prospective customers will have the opportunity to visit and test the Group's entire fleet at the Yacht Club de Monaco, a few days before the Cannes Yachting Festival 2017 (12-17 September). Last but not least, Navetta 33 will be displayed to the wider audience of yachting enthusiasts during the Monaco Yacht Show 2017 (27-30 September).

The new 33-metre (108.3 ft.) yacht is yet another product of the joint efforts of the Product Strategy Committee, headed by Mr. Piero Ferrari. Along with Studio Zuccon International Project for the exterior design and the Group's Engineering Department for the interior design. The Navetta 33 introduces some major innovations to Custom Line's semi-displacement superyachts of this size, added to the distinctive features that have already proved so popular on Navetta 37. The hull with bulbous bow delivers performance at the top of its class in terms of seaworthiness and stability with a range of 2,000 nautical miles (preliminary data) at economic cruising speed The yacht offers fabulous spaces to owners and their guests across all 4 decks: from the wide-body master suite forward on the main deck, through to the 4 guest cabins on the lower deck. Thanks to the external panoramic terrace on the starboard main deck, and the fabulous sliding windows on the aft upper deck, the lounge areas and interior and exterior dining areas are spacious and bright. By contrast, the sun deck with swimming pool and large sun pad is designed to provide moments of total privacy. The Navetta 33 features all the technical innovations that characterise all Custom Line's latest models: the patented DMT system for optimal use of the stern area; VOTIS software to provide the most flexible and practical on-board infotainment systems; and an integrated helm station for safe monitoring of the systems and equipment on board while under way. Moreover, the first Navetta 33 is equipped with a top of the range Hi-Fi system. Additional features include a special flexible joint in the transmission lines, which absorbs shaft vibrations, and other cutting-edge solutions that reduce noise levels to a minimum. The floating floor beneath the parquet flooring, for example, helps reduce the transmission of noise to the living areas by softening any footfall. Further comfort and safety solutions when mooring and at anchor include the electro-hydraulic stabilising fins and (on request) Seakeeper stabilisers. There are three engine options available: MAN 1,400 HP, MAN 1,600 HP, or CAT 1,622 HP, all EPA Tier 3 certified.