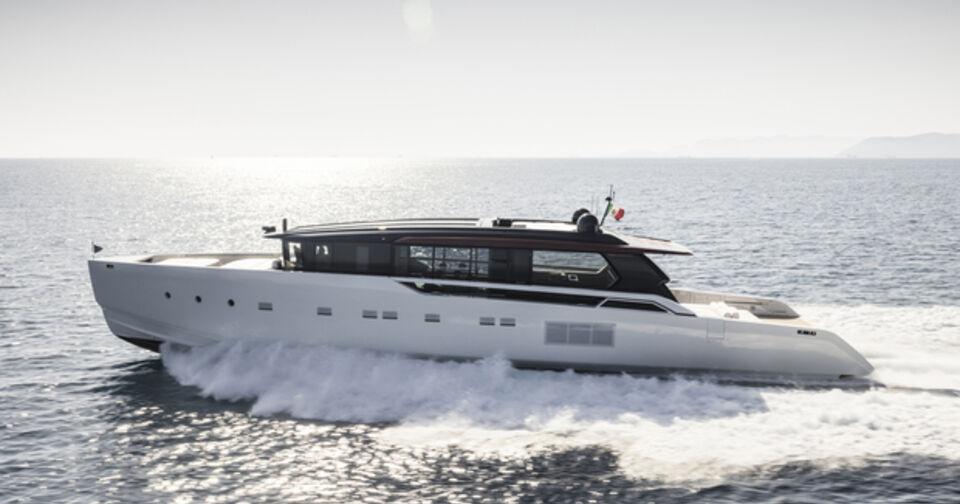 and the shipyard's first open coupé

Sanlorenzo is preparing for the Cannes Yachting Festival 2022, the show that opens the events of the new nautical season, to be held from 6 to 11 September in the heart of the Côte d'Azur, during which it will present the world premiere of its latest two new models: the semi-displacement shuttle SD90 and the open coupé SP110.

SD90 and SP110 reconfirm the shipyard's attention to sustainability issues and its desire to continue to create projects with a green approach, which, alongside extreme attention to detail and the more emotional aspects of living at sea, can be combined with an increasing focus on reducing consumption and the use of materials from alternative sources.

Entry-level of the renewed SD line, the yard's range of semi-displacement shuttles, SD90 is the third chapter in a success story that began with SD96 and SD118 and bears the signature of Zuccon International Project for the exterior design and Patricia Urquiola for the interior. SD90 is a project that focuses on transversal technological efficiency, both in terms of performance and material research.

The external lines give shape to a surprising product in terms of volumes and design, structured on two and a half decks with an open fly bridge. It is configured with a lower deck and main deck with a layout designed to guarantee the boat's maximum liveability, as witnessed by the new solutions introduced both externally and internally that give a totally revised perception of space compared to the other shuttles in the same range.

The interior design of the SD90 is by Patricia Urquiola who, in her third collaboration with Sanlorenzo, interprets the spaces, bringing her own vision on board with an approach closely linked to transformability. The spaces of the SD90 are permeated by a style that strongly recalls the marine world and that in every detail seeks the maximum connection between interior and exterior. Patricia Urquiola, who is strongly inspired by sustainability criteria in her designs, has taken great care in researching and using raw materials from alternative sources, with a view to the circularity of materials.

With the new SP110 model, the first open coupé in the history of Sanlorenzo, the company enters the world of sports yachts and does so with a revolutionary proposal. which breaks from convention by combining a green awareness and unique comfort with unparalleled performance.

The first yacht in the SP - "Smart Performance" range, the SP110 aims to guarantee high performance with maximum energy efficiency thanks to a fractional propulsion system consisting of three significantly smaller engines with an optimal power-to-weight ratio. The use of various weight-saving solutions, such as the use of lightweight materials, further optimises consumption and performance.

Fundamental to the realisation of the SP110 is the hull design by Marco Arnaboldi, optimised for use with hydrojet propulsion, and as central to its sustainability: the boat is equipped with an energy recovery system that uses monocrystalline solar panels.

The Zuccon International Project interprets the exteriors by creating new stylistic features that strongly identify the new range, while maintaining continuity with Sanlorenzo's tradition. The strong emotional character of this vessel is emphasised by its unusual shapes, its proportions, its aerodynamic lines, as well as by the livery, which departs from the shipyard's more traditional colours to draw closer to the more characteristic colours of sports boats.

SP110 is a two-deck yacht that features an unprecedented layout, consisting of large surfaces that can be used in a variety of ways, for an unequalled interior and exterior liveability on a yacht of this type. The interior spaces, designed by Piero Lissoni, are articulated on two floors that are not divided from each other, amounting to a "vertical loft", which encourages and simplifies conviviality, and results in a decidedly unexpected layout.

At Cannes, the 2022 newcomers will be flanked by the boats most emblematic of the company's tailor-made philosophy, a fleet of ten models that combine technological research, nautical excellence and Italian tradition.

Starting from the planing range, with the SL78 and the asymmetrical SL96A, SL90A and SL106A, the semi-displacement shuttles represented by the SD96 and SD118, and the crossover line featuring the SX76 and SX88.

The impressive presence of the Sanlorenzo shipyards on the quays of the port of Cannes, with two such important innovations from the standpoint of responsible development, once again testifies to the success of an entrepreneurial vision that is constantly projected towards the future, and which succeeds in bringing innovation by often revolutionising the customs of the sector.